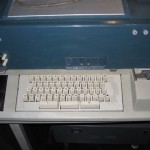 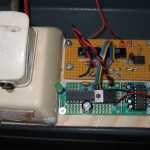 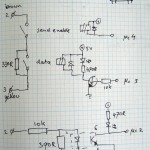 The first RetroInterface is a fact!. I used an Ottantotto to convert the signals to and from a T100S telex by Siemens to ‘modern day ASCII’ at 9600 baud. The system works well. Any type of terminal emulator on PC can be used to write and read data (half duplex) to the telex.

Apparently the Telex was already prepared in earlier times to get the line current from an internal source. I had to make a little circuit using a couple of resistors and an optocoupler to get the data out (50 baud). I used a modified version of the SoftSerial library that comes with Arduino. Apparently it uses the ‘delayMicrosecond()’ function which does not perform well in delays over a couple of milliseconds. (So the softSerial lib is not so good for datarates < 1200 bd I guess) For transmitting data two relais have been used, one to switch the internal current trough the data relais (necessary to disconnect the receiver side, otherwise you'd always echo all data) and the other to transmit the data. Especially getting the timing for the transmit pulses right was quite some work. The switch on period needed to be slightly shorter than the switch off. (shorter 1's than 0's). Also the startbit needed to be longer than the expected 20 msec. Source code and schematics will be posted on the wiki.

I made use of various great sources on the web for retrieving data on these machine. Johan (rtty.nl) has been of great help by scanning some old books on telex for RTTY! Also the sites teleprinter.net and rtty.com have an abundant amount of information.

The telex will be used in an installation ‘de taalmachine’ (language-machine) by de Spullenmannen in Amersfoort.