While making a dynamixel library for Processing, I started fiddling around with a simple humanoid head that I constructed earlier (as temporary setup for the soccer Humanoid). This head consists of three AX-12+ types dynamixel servo’s by Robotis, and two Logitech Webcam’s (currently only one used). The control software in Processing controls the head (basic a pan-tilt set-up) with a joystick, while panning the recorded image on a canvas. Due to the lack of precision in the joystick movements, this yields a Hockney-style image!.. So basically David Hockney is a mal-adjusted pan-tilt camera…. See this youtube clip for the generator in action!

For video capture the processing.video libraries have been used (don’t forget to install winVDIG from here). For joystick input proCONTROLL has been used. The dynamixel servo’s are controlled using a USB2DYNAMIXEL adapter. The java-sources that come with the dynamixel SDK have been recompiled (using JDK5.0 -> java 1.5.x version required) and packed with the processing source. 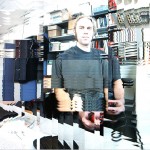 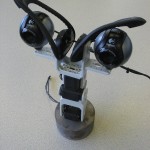